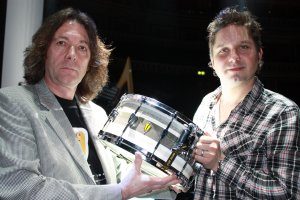 This ground-breaking snare design was used on the Snow Patrol “Re-Worked” UK Tour.

Adrian Darby, head of European A&R Ford Drums, said “It’s fantastic to be part of drumming history with Johnny and Snow Patrol. Ford have manufactured and supplied the first Corian Snare to a major performing artist worldwide. It was a moving experience to hear this special snare being played in such a prestigious auditorium”.