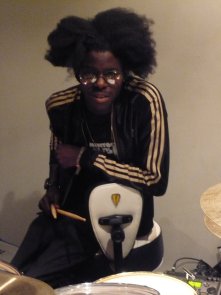 Paul Stanley-McKenzie has been performing recently sitting astride his Ford Smart Ass Seat. Pauli ( Young Drummer of the Year 2005) who plays for Gorillaz Sound System and has been touring extensively this year loves the comfort that the Swedish memory foam gives on a long gig. He was also attracted to the distinctive retro stying.

Suffice to say when Pauli hits the road his Smart Ass goes with him.
The Pinnacle for the Band this year so far has been their Headline gig at the Secret Garden Party in July. For a flavour of the Event and to see Pauli in action go to www.thepsmfilm.com
Paul is currently Touring extensively with the Band catch up with him on www.psmthepsm.com

We welcome Pauli to the Ford Family